Saturday morning we decided to go play in the sand at Tachogna Beach. It has been windy and stormy that last few days, so we knew we would not swim as the waves are huge and dangerous. The waves were so big that we were actually sitting way up on the beach under the trees to be safe. As we were sitting and playing with Gabe, Maddie was sleeping in her car seat under a tree. All of a sudden I saw a HUGE wave coming and I could tell it was going to get us. I yelled for Neemias to grab the baby and Gabriel! I grabbed the bag and Gabe’s shoes….but it was too late, it washed up on us up to our knees and made me fall over. Gabe was wet up to his waist and because Neemias had grabbed the baby’s car seat in time it was only wet all the way up the back but had not rushed over the baby’s head! Two of Gabe’s beach toys were taken out to sea and I lost one of my shoes. In that moment it started pouring down rain…drenching rain. We ran to the car, Neemias had the baby and I had Gabe. When we got there I said I was going to go look for my shoe. So I ran through the pouring rain back to the beach. Waited for another big wave to go back to sea and I scanned the beach. I saw my shoe stuck on some rocks. I ran to get it just in time, as another huge wave came….I ran! The water was almost up to my knees. By the time I got back to the van I was drenched completely though. Those waves are insane. Never seen anything like it. It all happened so suddenly. Thank God we are ok!

Yesterday we saw on the local weather channel that a typhoon was headed to the Philippines, thus causing our sea to have dangerous waves, rip currents and high surf (from 15 to 25 ft.). They were saying to stay away from the Ocean, as the waves were life threatening. We could hear the waves crashing on the rocks from our house! We decided just to drive down to Taga Beach to see what the Ocean looked like. There were some other people sitting on the tables above the rocks watching the spectacular sight. This particular beach is only accessible by a metal ladder and today it was completely gone. The rocks above the beach, where people usually jump off of into the crystal clear water, were being crashed into and covered by the huge waves. As the waves crashed we were sprayed with salt water even though we were a safe distance away from the sea.

It was amazing to see the power of the winds and ocean. As the light was disappearing quickly we decided it was time to go home. And guess what, we could still hear the waves from our open window! 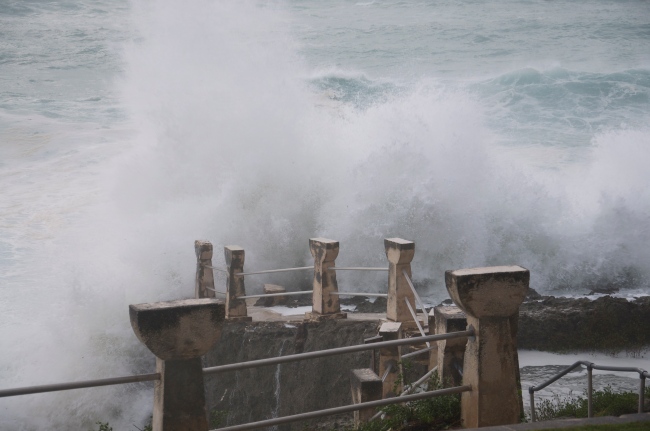